Have you ever had one of those “what the heck did I get myself into” moments? I pretty much have that feeling at least once during every one of my solo hikes, and sometimes on adventures with Little Hiking Buddy (shhh!!!). Well, I had that angst throughout today’s conditioning hike, with the phrase “Oh crap!” reverberating through my head at every step taken up.

On this early Thursday morning, I was filled with confidence in my longing desire to tackle a steep trail I had been dying to try for sometime. Although I have been up to the West Tiger 3 Summit on several occasions, I had yet to take this direct trail up to one of the minor summits. The forecast called for rain, but I assumed I would mainly be under the cover of towering brush of old-growth trees on this forested trail. That was how I found myself at Cable Line Trail just outside the main entrance to Tradition Plateau, before the self-rebuking began. 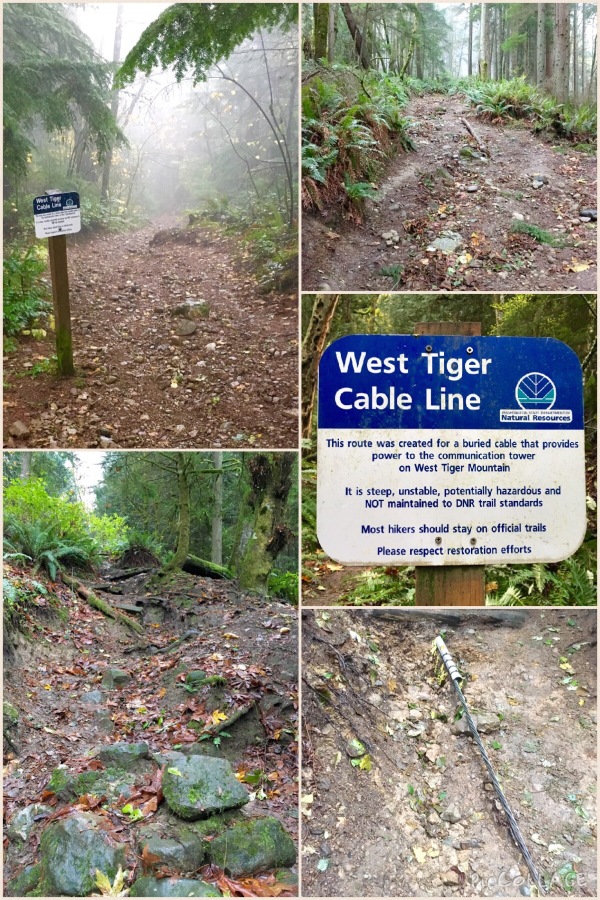 Since this trail was originally carved to house communication cables up to WT3’s summit, it is a straight line up the mountainside and is known to be unstable with loose rock and deeply trenched in slippery mud, particularly following severe rain (which we just survived for the past week or so). Many a trail-runner and day-hiker attempt to put their best foot forward to tackle the short, steep terrain for the glory of swiftly reaching the mountain top. I was one of those foolish ones this morning. Oh well, at least I survived to tell the tale.

The bottom of the trail began with thick, overgrown brush masking the muck underfoot and the sheer physicality of what was still to come. Just as I caught my breath after an initial warm-up, I realized the wall in front of me was actually the trail itself. THERE WERE NO SWITCHBACKS. That was the last section of relatively level ground for a mile. So, I spent most of this hike looking down for three reasons: 1) to keep the rain out, 2) to maintain solid footing and 3) to not cry from the shocking view of the relentlessly steep trail still up ahead of me. Where there wasn’t slippery mud, there were moving rocks, hanging roots, felled trees and knee-high step ups. Regardless, I was determined to make it up and down within my limited window before returning to pick up LHB from preschool.

In the process of looking down (when I wasn’t censuring myself for taking this trail up), I took note of wonderfully beautiful, peaceful and intricate scenes before me. The mist shrouded the forest just as I reached the WT3 lookout point – of course, there was absolutely no view to be had this morning, unless you consider sheer white as a sight to behold. It made for the perfectly quiet moment, one most solo-hikers strive for on their trails. I even ran across a unique decaying piece of a felled tree flaming with bright red just under the outer bark, making for a striking visual against the dull, brown mud. Whenever I did take an absentminded moment to look up, I saw brilliant yellow trees and their fallen leaves illuminating my way up the mountain. Gorgeous scenes for which painters long to create. 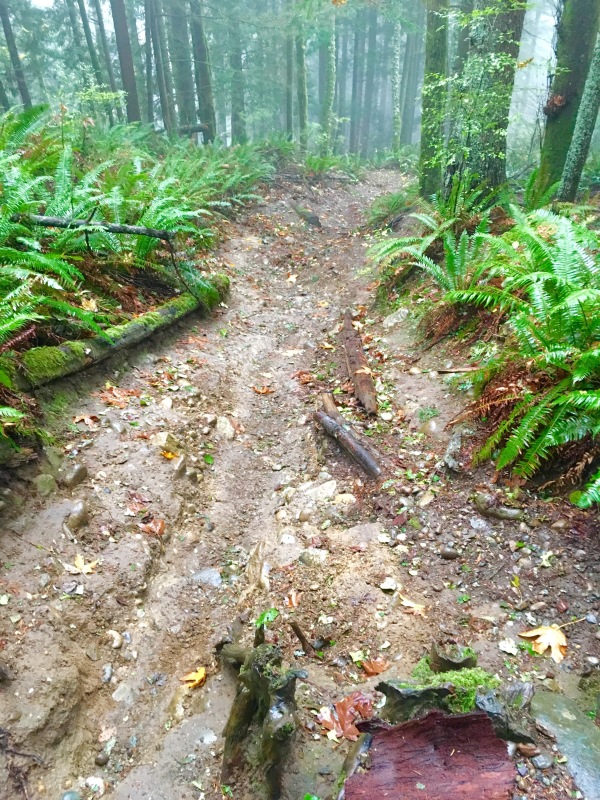 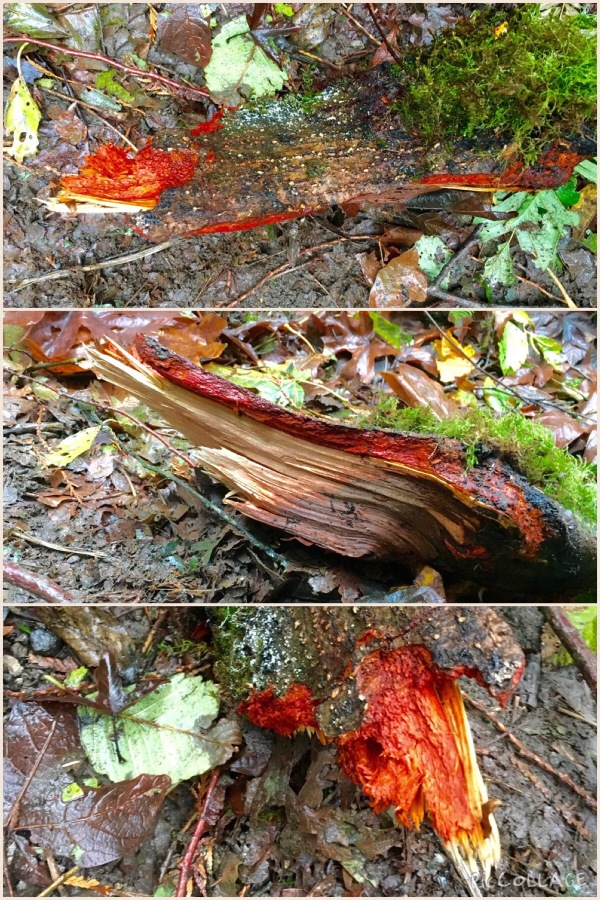 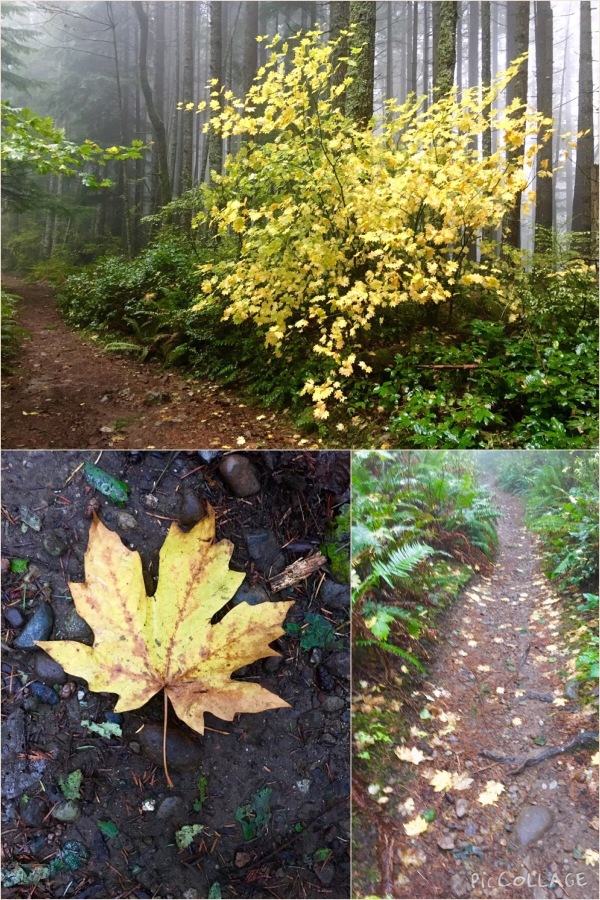 When I finally did reach the summit of West Tiger 3, I was immediately greeted by the resident scavenger. He perched himself firmly on his branch, making no attempt to fly away as I approached nearer and whistled louder. This bird was the gatekeeper and expected a token for entry, which I had none to offer. And, so, I left him after taking a 10 minute rest to look out to a view of opaque nothingness.

The descent on most trails is typically the toughest part on my knees, and this was no exception. Maybe because my inner-self was so angry, but I applied different techniques from climbing, skiing and yoga when I made my way back down to the car. Using my trekking poles for balance, I stemmed over the muddy trenches, I pivoted around sharp angles, and I grounded myself in various poses to offset gravity. It wasn’t so bad after all – wait, who am I kidding!?!? It was rough, but an awesome way to condition myself for more back country exploration yet to come this winter. 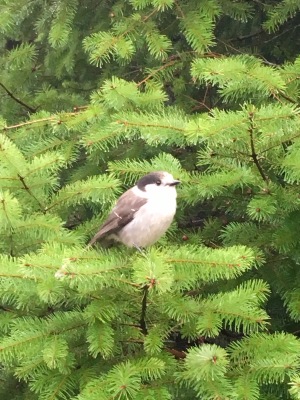 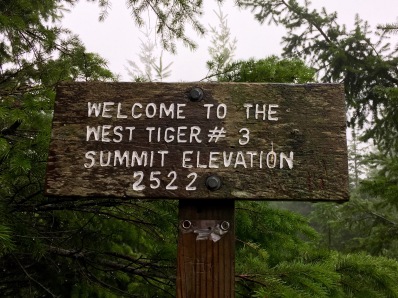