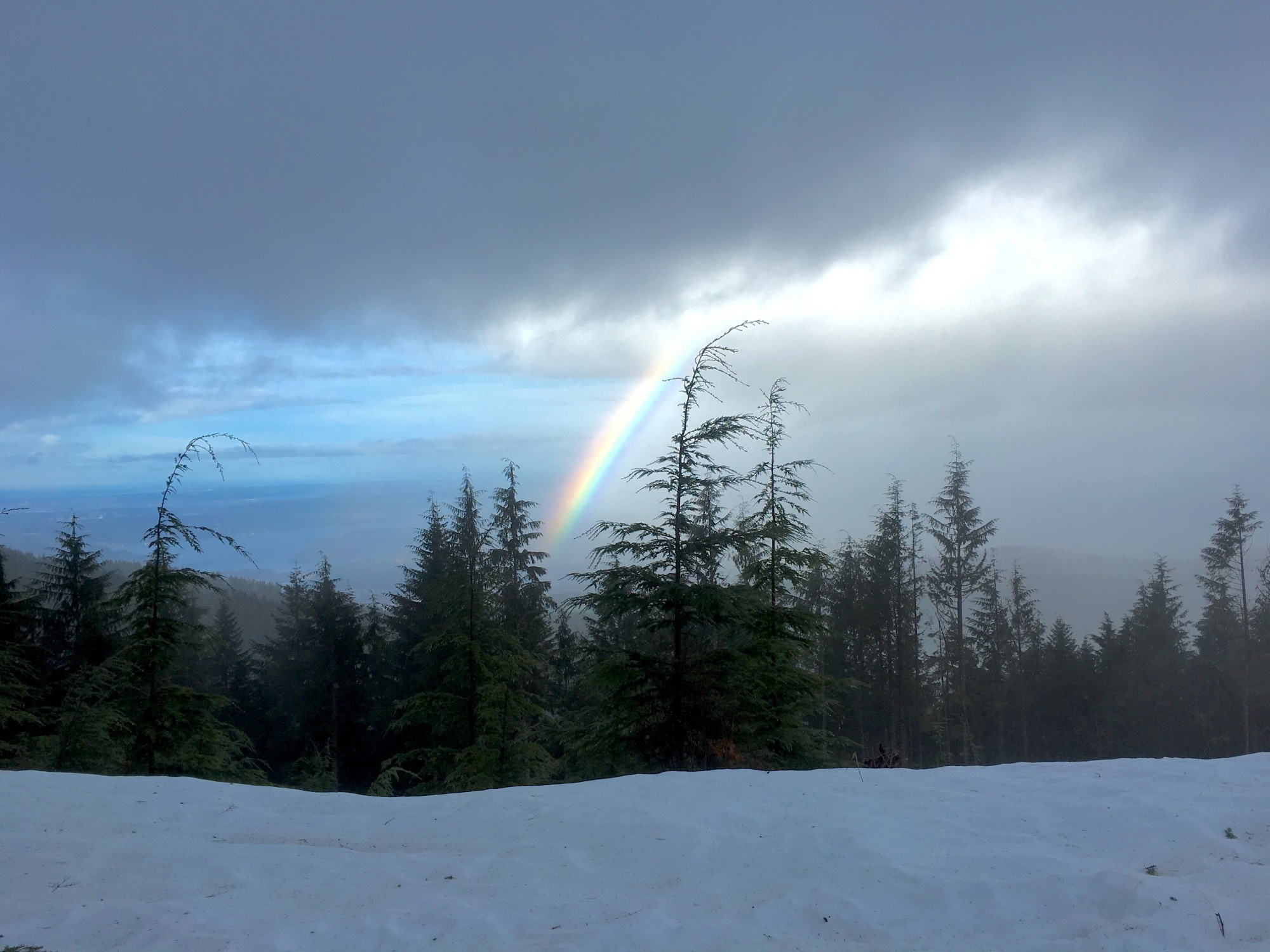 Today was my first solo hike since receiving news of my father’s passing. Actually, today was the first time in the last several days I was completely alone and left to my own devices. I wasn’t exactly sure how I would feel or what to expect on this solitary journey. Truth be told, I spent a lot of time either in my head, talking to my father or in tears. Either way, my time on the trail was a cathartic process that helped me move forward.

With the Northwest Avalanche Center issuing high avalanche warnings throughout the Cascades, and having spent yesterday morning in the snow with Little Hiking Buddy, I only had enough desire to drive as far as the closest mountain. West Tiger Mountain, a pinnacle I see daily during our commute to school and activities, has become an old friend at this point. I have explored many of its trails and have stepped atop all three summits (four, if you include Poo Poo Point). But today was my first exploration of West Tiger 1 via Dwight’s Way. 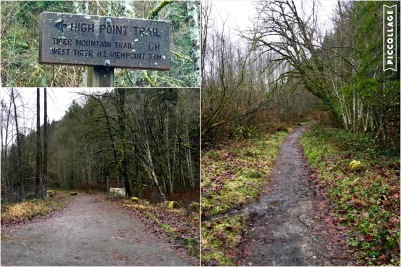 I started my journey just after 9:15 am with a walk along SE 79th Street towards 270th Avenue SE. This initial portion of the described route took me past Tent City 4, a makeshift neighborhood for some of the area’s homeless population. This was another reminder of my roots, harkening back to when my family was placed in temporary camps in the Philippines and Guam immediately following our emergency evacuation from Saigon. While the folks at Tent City 4 obviously have a hard life, they still managed to smile and find humor in their surroundings as they joked around with one another. Seeing this lightheartedness in a challenging situation compelled me to rethink my angst and count my many blessings instead. 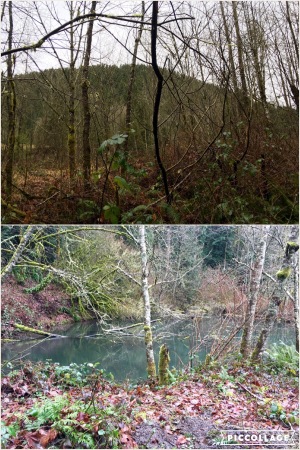 Once I traversed a quarter-mile past my start, I found the High Point Trailhead just after crossing the eponymous creek and pond. The pond was nothing more than a swampy soup of green hidden under fallen leaves and behind bare branches. However, the open scenery on the opposite side of the path clearly displayed Grand Ridge, home to many of my well-loved mountain bike trails. Shortly after heading up the trail, I reached a junction pointing me in the direction of Lingering Trail, one that is no longer of much use but seemed to have had stunning vistas in the past. With that, I continued along High Point Trail for about another half-mile before finding the start of Dwight’s Way. The route up to this point was mainly an old logging road, but it still offered the mossy beauty that makes Tiger Mountain so delicately lush. 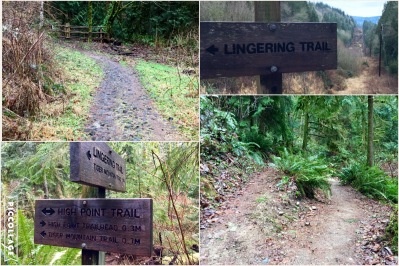 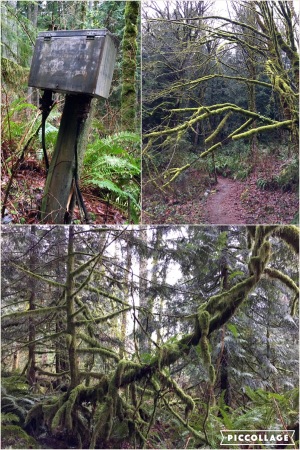 Dwight’s Way was just as special as I could hope for on this gloomy day. Beginning with a climb up built-in stairs, this trail wound its way higher through the forest of second-growth trees as well as over old bridges and logs barely preserving one’s step from the rushing water below. At every twist up and turn down, the trees highlighted my path with their richly hued trunks and branches wrapped in shades of deep jade and vivid emerald. The sounds of I90 slowly faded behind me, leaving me with a sense of clarity and wanting to share this lovely experience with someone. So, I did…with my father. I was deep in thought, reminiscing about my childhood, mourning the indelible estrangement from my family, and illuminating the blessings of my current life. This hike, this trail, was the perfect time and place to have a peaceful conversation, if only to myself (and my father). 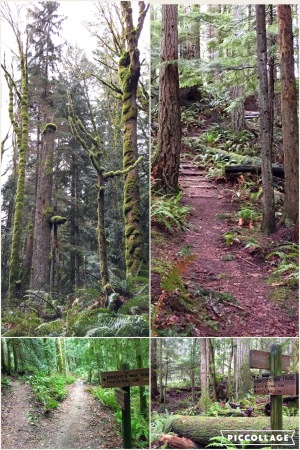 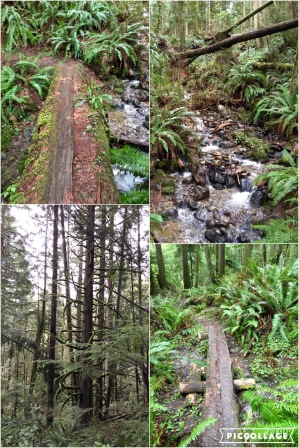 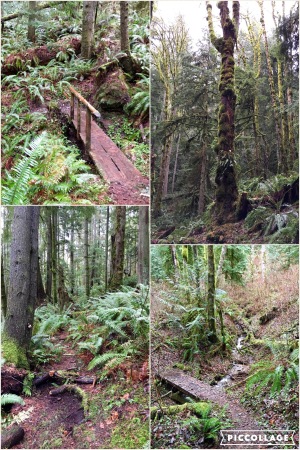 Unfortunately, Tiger Mountain has not gone unscathed from the severe weather experienced both this summer and winter. The bursting wind and rain of recent months have brought down too many brittle trees drained of life from the summer drought. There were a number of felled trees recently cut apart or removed by the dutiful crews managing this wonderful state forest. It was comforting to know that although this trail isn’t as traveled as more popular ones, someone continues to watch over this area of the forest. (It was as if a guardian angel was watching over me throughout this solo hike.) For however many trees that had fallen, there were just as many nimbly branched saplings rising from soil once encumbered by logs of old. Nature always renews itself, building on the past to create a stronger future. 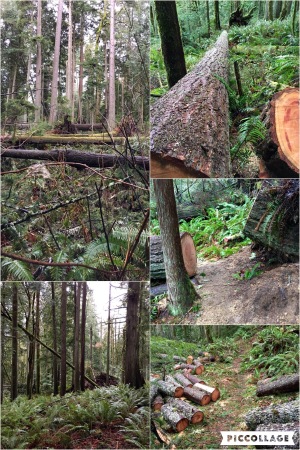 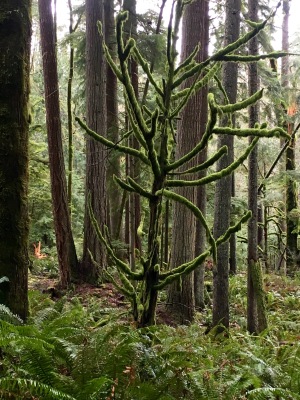 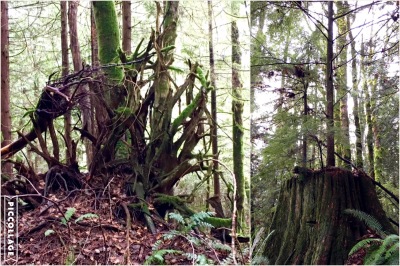 After following Dwight’s Way for almost three-quarters of a mile, I found myself at the junction to my final trail to the summit of West Tiger 1. I had traversed part way down Preston Trail once before, but had never ascended its steep incline. Cable Line Trail has nothing on Preston Trail! The severity of this trail in some parts not only involve the challenge of its vertical climb, but also its narrow curvature hidden under the depths of overgrown brush. I was left hoping it would soon end. My trekking poles were more of a hindrance at this point as they repeatedly became entangled in the webbing of vines and roots on the fringes of this limited footpath. 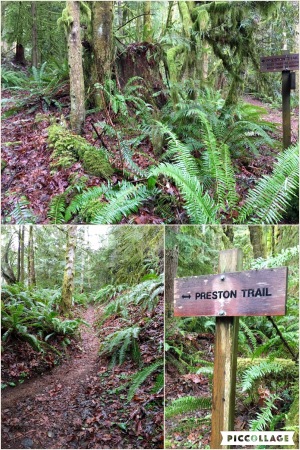 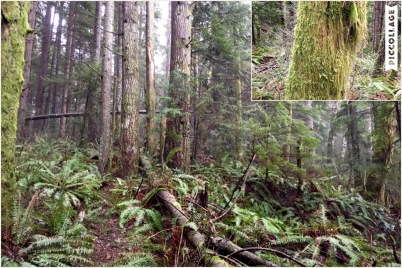 When I finally reached an altitude of 2100 feet, I noticed patches of snow on the outskirts of the trail as well as the first sign of mist. The snow gave me hope that I was near the summit! It was at this point I encountered the only other person – a trailrunner, no less! – throughout my ascent. As she passed me on her way down the mountainside, she was kind enough to forewarn me of the snow and ice just above. I promised her I’d be safe, showing her the spikes latched to the back of my pack. With that, I continued my climb until I was completely surrounded by drifts of white. She wasn’t exaggerating about the snow! The final 100 ft. push up to the summit involved following the deep tracks of hiker(s) before me. My spikes did me no good here, as one step off the boot trail left me almost waist-deep in snow. (Thankfully, I re-winterized my gear from head to toe the prior night.) 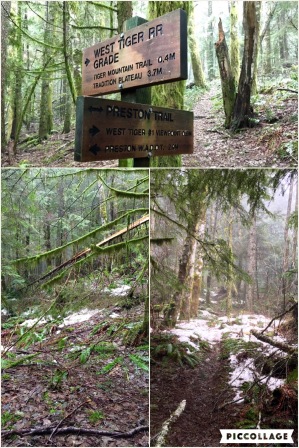 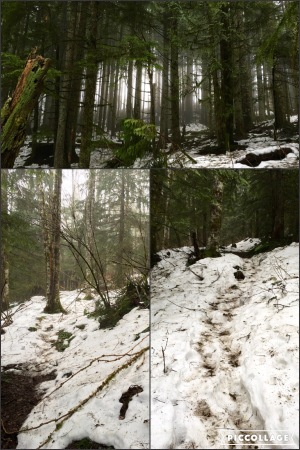 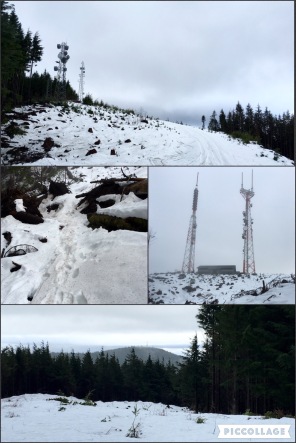 Alas, I made it to the summit of West Tiger 1!!! When I first came out of the trees and around the towers to the expected view of Lake Sammamish, Bellevue and beyond, I was instead presented with nothing more than thick clouds all around me. The exposed crest left me shivering as brisk winds of the incoming storm swirled past me. It was at this point my camera/phone began to plummet in battery life from the excessive chill. As I was fumbling for my charger, the clouds were quickly pushed aside, perhaps by an angel; out of nowhere came a rainbow, clearly displaying its full array of colors, followed by a brilliant panorama of the western blue vista as well as the snow-capped Cascadian peaks to the north and east. I could clearly see Haystack atop Mount Si! I know my father, my guardian angel, was there with me at this point, if not throughout my journey thus far. The weather had held up during my entire ascent, with not a single drop let down from the clouds above; and yet, I was told it had been raining throughout the region most of the day. To top it off, I was welcomed with a spectacular rainbow.  Thank you, Dad. 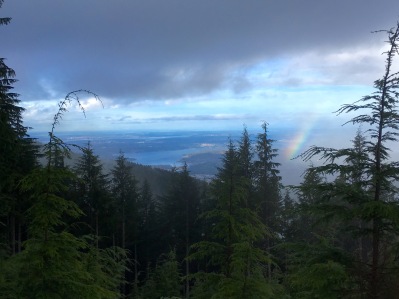 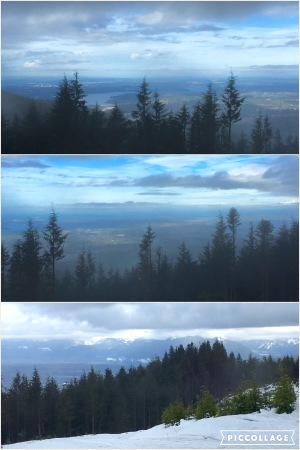 I lingered at the summit for as long as I could. I didn’t want to leave. I felt warm and at home, as if I was wrapped in a comforting hug. The trail was beautiful; the hike was enlightening; and the view was memorable. For all the misery this dreary day could have poured on me, it was an incredibly wonderful journey. From the cold darkness of the morning came a steady light from above guiding me throughout my day on this mountain. West Tiger Mountain will always hold my heart for so many reasons, but especially for this day with my father.

When I finally headed down the mountain, the rain began to drizzle on and off. I was quicker on my way out than my way in, not only because of gravity but also because my spirits were so much lighter than when I had first woken up. Just as I entered my final mile of the hike, returning along Dwight’s Way, blue skies briefly appeared above me. The momentary sunlight flickered through the sparse forest, brightly bathing a young tree just before me. It was my last picturesque memory of the day, something I can see when I close my eyes to sleep tonight. 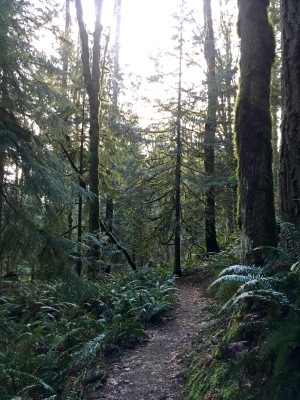