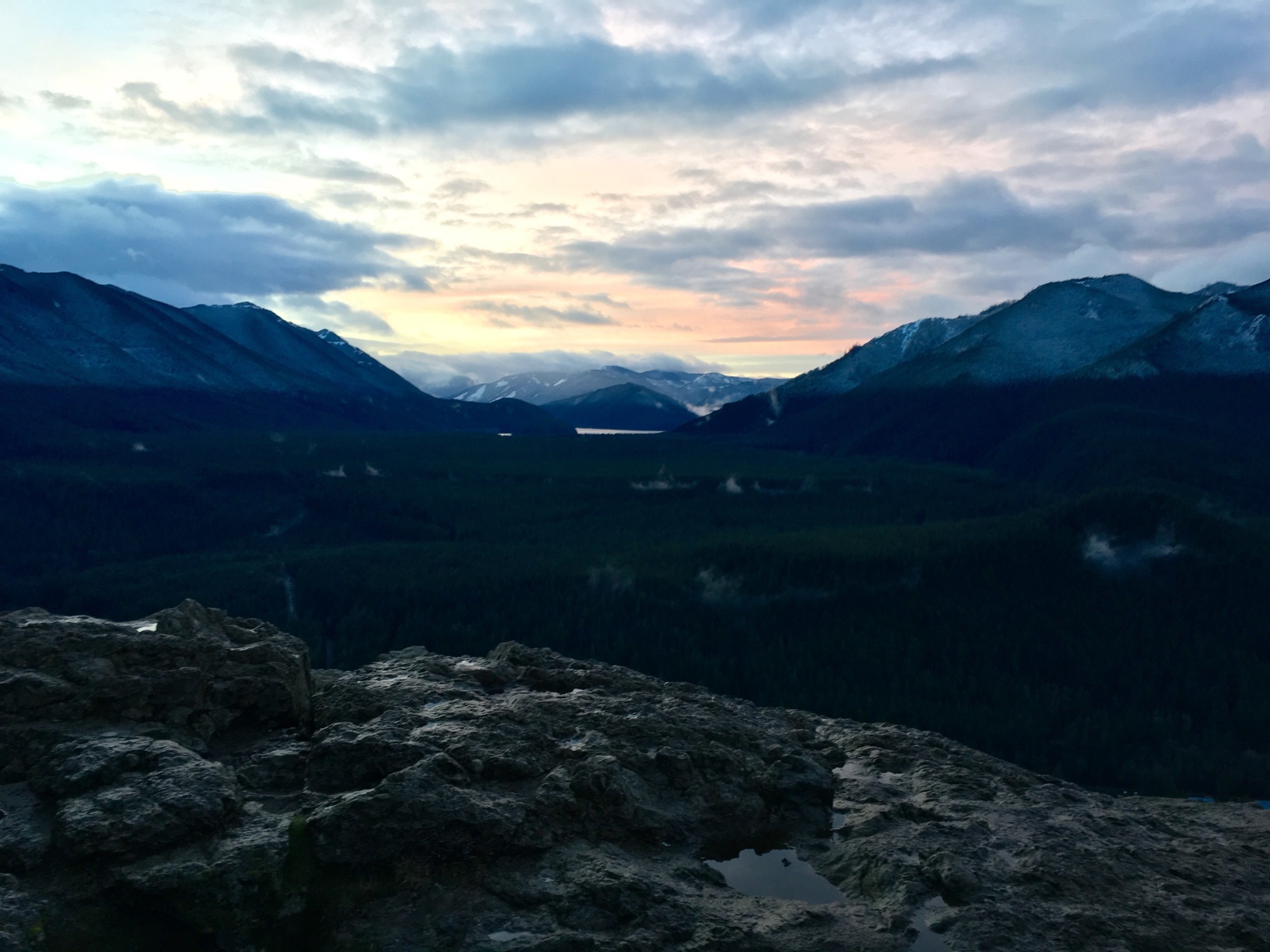 Another major storm was headed our way today. With severe wind gusts expected to hit the area after 11 am, my only chance for a long hike this Sunday required an early morning start. It didn’t help my situation that we also had to contend with an hour’s loss of sleep from the “springing forward” of Daylight Savings Time. After missing the chance to hike last weekend, I found myself wide awake at 4:30 am raring to get out to the trail. This would be my first chance at a sunrise hike! Wait, me, hiking solo in the dark on a dreary day…hmm, why not?

My best bet for a spectacular sunrise view was Rattlesnake Ledge, with its east-facing views of the Cascades. Having been on this moderately easy trail more than a dozen times in the past few months, I felt comfortable enough to attempt its well-maintained path in the dark. Though I vowed to save my trips up this overly popular destination only for weekdays – when less people are available to play outside – I assumed not many folks would be inclined to wake early on any stormy weekend day, much less following the time change. I was right.

Finding myself completely alone in the darkness of the parking lot at 5:45 am gave me a moment to pause and rethink my situation. I had been here before, as the only car in the surrounding area on a potentially stormy day. I made the choice then to turn around before even turning off the engine. However, today was different: I am a more experienced hiker (relatively speaking), I am more confident in my physical abilities (and limitations), I am more attuned with my senses (and in control of my wits), and most importantly, I am more determined to step outside my comfort zone. Yet, hiking alone in the dark was not just a matter of being uncomfortable for me; it was akin to jumping across cliffs above raging ocean waters, all while fully aware of my inabilities as a swimmer. Sink or swim.

I decided to swim. With my rain gear and headlamp on, I headed out into the darkness of the trail just after 6 am. Amazingly enough, my hike wasn’t as frightful as I imagined it would be. Truth be told, a million thoughts scampered through my mind, “Would I run into that bear I saw on the western end of Rattlesnake Mountain? Worse yet, what if I ran into a cougar? If I badly injured myself, how long would it be before someone found me?” I think, however, these legitimate concerns safely guided me forward this morning. I was more alert to every sound and movement than during any previous hike, and I found myself making conscientious decisions with each step I took up the mountainside. Since it was dark, I cautiously blazed up the trail as there was really nothing to photograph until first light. 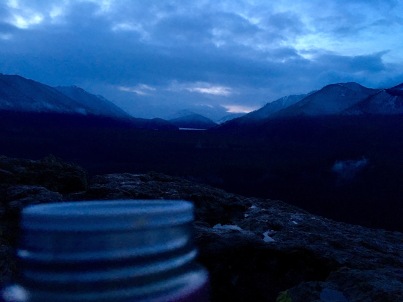 I arrived at the rocky bluffs of Rattlesnake Ledge just after 7 am. With sunrise expected for 7:22 am today, I had enough time to make myself comfortable and enjoy a wholesome breakfast of homemade granola and juicy blackberries over Greek yogurt. And, of course, I had with me a thermos of freshly brewed Kona coffee. As I was peacefully savoring my breakfast, a pair of hikers appeared behind me. They had the same expectations of having the trail all to themselves this morning, which they did once they headed down the lower cliffs to enjoy their breakfast high in this cannabis-legal state of Washington. 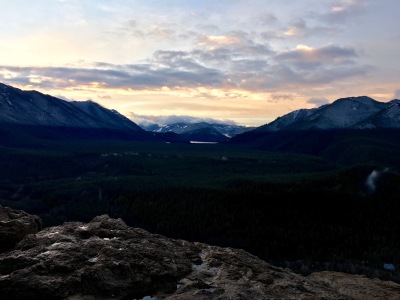 As I sat and waited for the sun to appear, the morning lightness slowly illuminated the familiar peaks before me. I could see a clear line across the mountains delineating light and dark, where the snow uncloaked the trees from their winter respite. The air was eerily calm atop this normally blustery Ledge. Rattlesnake Lake lay undisturbed below me, as did Chester Morse Lake in the distance. Beyond the near peak of Mt. Washington and its sister summits, the soft clouds seemed to blissfully waft throughout the horizon. Within moments, striking hues of cantaloupe, raspberry, peach and plum lit the dim sky. Breathtaking. 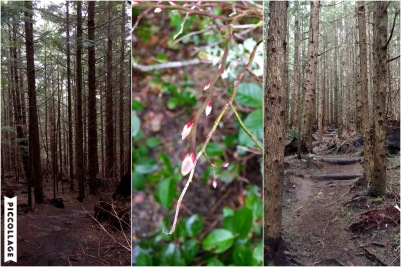 Once the sun made its way over Mt. Washington, I headed towards East Peak for the remainder of my long trek. I discovered spur trails that led me to the upper ledges of Rattlesnake. I hadn’t realized these existed! The views from above were even more magnificent than what I witnessed below. I can’t believe I never took the time to explore this part of the trail. Although spring blossoms were beginning to reveal themselves here, East Peak Trail had a completely different feel than the comfortable route I took up to Rattlesnake Ledge. The grisly path here was filled with roots and broken limbs, seemingly untouched for months. Looking ahead of me into the unwelcoming forest of lifeless trees, I was once again filled with nerve-wracking fears from the early morning. No reason to stop now – I was expanding my comfort zone today by continuing to step beyond its borders. 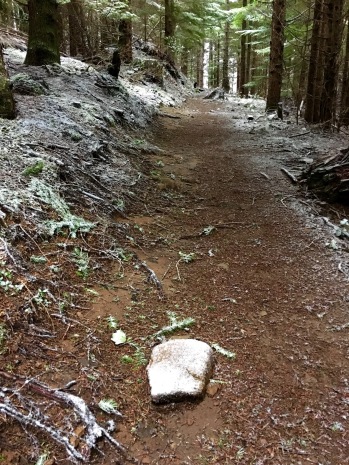 Snow began to appear at 2500 feet of elevation. At first, it was a mere dusting fresh from the recent snowfall; then, my forward progress led me straight into a forest of frosted trees that seemingly glowed against the morning sky. The whiteness of the trail gave me a sense a peace, subduing my unwarranted trepidation and renewing my confidence in myself. As I continued on, I came across more felled trees over an incredibly short distance, like hurdles to jump (or climb) over one after another. These trunks and branches had come down long before this week, as many were deeply entrenched in the frozen winter tundra. The snow here also changed from crisp white to the dingy grayness of storms long past. 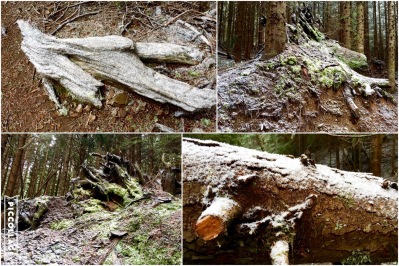 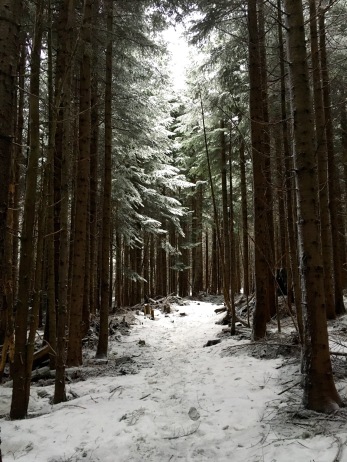 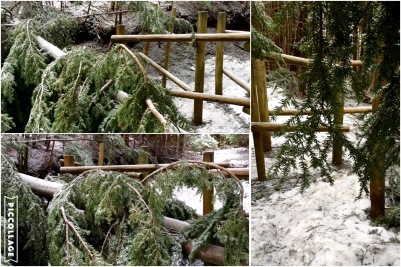 If it weren’t for sign posts highlighting the way to East Peak, I would have unwittingly hiked past the summit, distinguished only by an unnatural radio tower. After briefly searching for a route to the steel frame, I thought better than to post-hole my way through the snow for a likely lackluster view. I quickly took in the scenery of the open meadow-cum-snow field before me and turned around to head back. I chose not to linger at the top since I knew I had a limited window before the clear skies dissipated. As I made my way back to the Ledges, I passed quite a number of hikers on their way up. I wondered if they were aware of the pending wind storm, as many seemed completely unprepared with just fleece jackets, shorts and sneakers to protect themselves from the dismal skies. 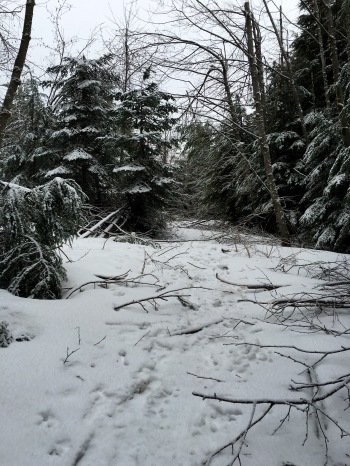 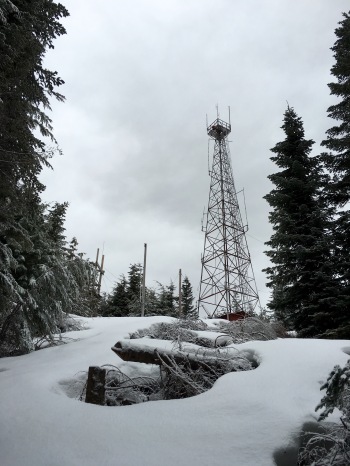 As soon as I reached my final mile, I heard trees sway overhead as the wind hissed wildly through their branches. I was quite thankful to be at the bottom of Rattlesnake Mountain rather than up on East Peak at this point. I picked up my pace and returned to the lot just as the weather ran afoul. As I put my car in reverse, the rain clouds simultaneously unleashed their fury. After the experience of a beautiful sunrise on this bleak day, I’m glad to come back to my cozy home, just in time for a second breakfast with my family. My bacon and eggs were the perfect finish to this incredible morning.